Join the Platform
ABOUT FORCLT
Uniting the Church,
Transforming the City.

FORCLT was formed in April 2015 out of a burden placed on its founder, Rob Kelly, approximately four years earlier concerning the lack of church unity that he and many others were experiencing in our great city – Charlotte, North Carolina. Rob, a pastor of 13 years at the time, was meeting regularly with a close knit group of other pastors from across the city. As their relationships grew, their collective burden for the division in the Church and the needs of our city grew exponentially.

During the formation period, the founding team of FORCLT defined two major issues as related to the Church in Charlotte that FORCLT would engage:

As this vision began to take hold with pastors and Christian leaders across the city, it became clear that no single church could lead this unified effort. Rather, it would require a neutral convening organization operating as a platform to connect all churches, denominations, nonprofits and organizations wanting to seek the transformation of the city.

Deeply burdened by these realities, they recognized that the answer to these issues was found in the prayer of our Lord Jesus to His Father before enduring the cross as recorded in John 17:20–23.

Committed to this prayer as their driving motivation, the founding team launched FORCLT with a commitment to honoring the prayer of Jesus in John 17 through creating platforms that unite the Church for the transformation of our city. Jesus is clear that when the body of Christ is truly “one,” the world will know that the Father sent Jesus into the world and that the Father loves the world as He loves His one and only Son.

The initial strategy of FORCLT was simply create environments for Christian leaders throughout the city to convene together, build relationships and trust and see how they may work together to for the good of the city. This led to the first FORCLT pastoral network. Over time, and after extensive prayer and planning, the following strategic organizational verticals emerged to carry out our purpose to unite the Church to transform our city.

FORCLT mobilizes networks of churches and leaders around city-focused mission efforts. Our networks form around either geographic proximity or a specific cause and need in the city.

FORCLT maintains a posture of learning allowing us to better understand the real needs of Charlotte and create resources to equip the church to most effectively meet those needs.

FORCLT mobilizes collaborative city-wide initiatives that unleash the Church on Christ’s mission to meet the most pressing needs of our city.

FORCLT serves as a neutral convener,  connecting and equipping church leaders in Charlotte for unity in Christ’s mission through a series of conferences, network gatherings and other events, either directly hosted by FORCLT or through our network partners.

FORCLT provides a citywide mobilization platform facilitating churches and nonprofits to work together to meet the most pressing needs of the city.

WE’RE SORRY
Sorry, this network is probably not for you.
For Charlotte is a gospel-centered network of Christian
churches collaborating for the good of our city.

LEARN MORE ABOUT OUR MISSION
NEW!
Check out the
2019 State of the City Report 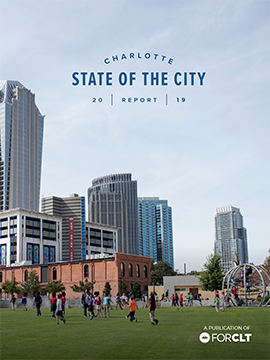